Franklin Pierce and the Golden Age of Guano

Among historians, Franklin Pierce consistently ranks among the worst Presidents of the United States. Part of his infamy arises from a crucial piece of legislation he signed--the Kansas-Nebraska Act of 1854. The act established the territories of Kansas and Nebraska, and allowed each territory to decide whether to allow slavery, effectively negating the Missouri Compromise of 1820, which outlawed slavery north of latitude 36 degress, 30 minutes. Violence erupted between advocates of slavery and freesoilers in the Kansas territory, leading Horace Greeley to coin the phrase "Bleeding Kansas." The violence in Kansas was a prelude to the Civil War. 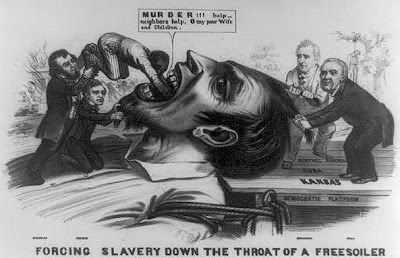 The historical impact of the Kansas-Nebraska Act overshadows another significant law enacted during the administration of Pierce--The Guano Islands Act of 1856. Yes, this is a law that deals with bird droppings, but which also had a lot to do with American expansion.

As a fertilizer, guano was essential to the agricultural economy of the U.S. during the period from 1840-1880, sometimes called, with a completely straight face, The Golden Age of Guano. Pierce's predecessor, Millard Fillmore, had this to say on the topic in his State of the Union Speech in 1850:

Peruvian guano has become so desirable an article to the agricultural interest of the United States that it is the duty of the Government to employ all the means properly in its power for the purpose of causing that article to be imported into the country at a reasonable price. Nothing will be omitted on my part toward accomplishing this desirable end. I am persuaded that in removing any restraints on this traffic the Peruvian Government will promote its own best interests, while it will afford a proof of a friendly disposition toward this country, which will be duly appreciated.

Franklin Pierce also brought up the topic in his 1853 State of the Union speech:

A new branch of commerce, important to the agricultural interests of the United States, has within a few years past been opened with Peru. Notwithstanding the inexhaustible deposits of guano upon the islands of that country, considerable difficulties are experienced in obtaining the requisite supply. Measures have been taken to remove these difficulties and to secure a more abundant importation of the article. Unfortunately, there has been a serious collision between our citizens who have resorted to the Chincha Islands for it and the Peruvian authorities stationed there. Redress for the outrages committed by the latter was promptly demanded by our minister at Lima. This subject is now under consideration, and there is reason to believe that Peru is disposed to offer adequate indemnity to the aggrieved parties.

Peruvian guano was desirable because the seafood diets of seabirds such as the Peruvian booby and the Guanay cormorant are rich in plant nutrients, and the dry climate along the coast of Peru results in the guano drying quickly, making it relatively odorless, and preventing nitrates from evaporating away.

While the finest kind of guano came from Peru's Chincha Islands, other small islands were potential sources. I grew up on a duck farm, and I can testify to the prodigious amounts of manure produced by large numbers of birds confined to a small area. Several small islands frequented by seabirds in the Pacific and Caribbean were collectively known as the Guano Islands.

Peruvian Booby
So, in 1856, to promote the agriculture necessary for westward expansion, Congress passed, and Franklin Pierce signed, the Guano Island Act, which allowed U.S. citizens to mine guano (deposits which had been accumulating for thousands of years could be up to 150 feet deep) from any island, rock, or key not under the jurisdiction of another government. The U.S. would annex the island and protect the rights of the discoverer to occupy the island and mine the guano. The Act also stated the U.S. could give up possession of a guano island it at any time. Although not explicitly stated, Congress was making sure that the U.S. could dump any guano island when its resources were all used up.

Franklin Pierce was, or course, incorrect when he referred to "inexhaustible deposits of guano," and the disruption of the ecology of guano islands resulted in dwindling supplies. That, plus the industrial production of fertilizer, brought the Golden Age of Guano to an end around 1880.

Peruvian guano is in the news again today, as prices of synthetic fertilizers skyrocket. Peruvians are collecting what little guano is found on offshore islands as fish populations and the populations of seabirds which feed on them have dwindled. See the New York Times article "Peru Guards Its Guano As Demand Soars Again".
Posted by Unknown at 11:58 AM

Ah the boast and swagger of 19th Century American politics! Just finished 'T.R.', a great read and a natural follow up to this era.