The Manly Blogger Guy Award has languished for months in its parents' basement, awaiting the opportunity to be bestowed on a deserving recipient. It didn't go far after I initiated it last year. Here is an excerpt from the inaugural post:

One of my other blogs, The Marx Brothers, recently received the "One Lovely Blog" award, replete with a logo composed of pink roses, pink ribbons, and a teacup. Obviously, this award was created by a woman to boost the self-esteem of her sister bloggers. One of the requirements of the award is to pass it on to other bloggers, but I just couldn't bring myself to do it. I toyed with the idea of a more male-oriented blog award, such as a "Blog and Suds" award with a stein of beer for its logo, or a "Silent But Deadly" award, to be awarded only after a blog had received the "Blog and Suds" award. The logo of the SBD award would be an atomic mushroom cloud. I even considered a foldout "Blog of the Month Award." After fellow male blogger Archie also received the "One Lovely Blog" award, I knew it was time for action. Even though Archie graciously accepted and passed on the award, we guys (as men are invariably called in commercials for prostate-shrinking pharmaceuticals) need our own award. Thus I hereby launch the "Manly Blogger Guy Award." The conditions of the award are as follows:

1. The blog receiving the award must demonstrate masculine qualities such as sloth, boorishness, urinary hesitancy, or flatulence. In the interest of equal opportunity, these criteria do not entirely exclude female nominees.

2. No blog which plays background music such as "Somewhere My Love" or "My Heart Will Go On" is eligible.

3. The award should be passed on to as many other blogs as possible, but watching televised sports or taking a nap should take precedence over passing out awards. 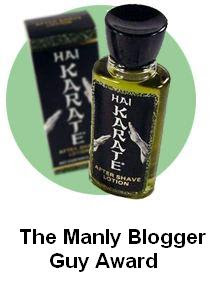 For the award logo, I have selected a classic symbol of male self-delusion. Back in the 60s and 70s, Hai Karate aftershave commercials used dialogue like:

GUY: Hey how about a movie tonight?

ANNOUNCER: New Hai Karate aftershave is so powerful, it drives women right out of their minds. That's why we have to put instructions on self-defense in every package. Hai Karate, the brisk splash-on aftershave that smooths, and soothes, and cools. Hai Karate--aftershave, cologne, and gift sets. Hai Karate--be careful how you use it.

They really did include self-defense instructions with these cheap toiletries. BTW, I bought the product, but never had the opportunity to fight off crowds of amorous girls--or even one for that matter--while wearing Hai Karate.

I have been remiss in not recognizing fellow blogger Matthew Coniam before now. So, I am giving him the award twice--once for his post "Universal Girls Poll Results" at his blog, Carfax Abbey, and once for his post "Marx Mysteries Solved While You Wait! Just ask the council..." at the Marx Brothers Council of Britain blog.

Congrats, mate!
Posted by Unknown at 9:27 AM

I'm honoured! I shall see to it that it rampages through the blogsophere!

I've passed it on: hope you approve of my choice!
Best, Matthew

I will be proud to post the manly blogger guy award upon my manly blog and inform others where it originated.

Proudly displaying my Manly Blogger Award on the main page on the right side of the screen with a link to this site.

I am thrilled and excited.

Pert-near' wet myself due to the excitement!!!

Anybody with the chutzpah to bestow the award on himself obviously is deserving of the honor. And incontinence is somewhat related to the criterion of urinary hesitancy, so congratulations!

The award upon the Disgruntled Old Coot's blog remains... appearing with pride and a beacon to manly entities everywhere.

Of the many honors bestowed upon me over the decades the Many Blogger Award is the epitome of my many accomplishments that have ranged from the many ports of the Orient to the largest metroplexes of the USA to the most isolated hamlets huddled atop the Ozark Plateau, the traditional homeland of the hick hillbillies.

Thanks, Scott. Googling "The Manly Blogger Guy Award" shows no activity in the last 3 or 4 years. I'm glad someone still appreciates it, even if it never went viral.

With immense pride and minimal flatulence within my man cave I am adding the Manly Blogger Guy Award to another of my blogs.

It is the "I Adore Food" blog where I write about... vittles. Comestibles. Grub. Chow. Edible stuff.