One of the things I find distasteful about writing for print media is the process of submitting my work. Once a piece is submitted, there are four possible outcomes. Frequently, an almost instanteous rejection occurs, raising doubt as to whether anyone actually read the piece. Second (rarely), the piece may be accepted after a reasonable period of evaluation. Third, the piece may be rejected after a reasonable period of evaluation. Finally, the piece may languish in limbo for a prolonged period of time without an editorial decision either way. The following falls into that category. I submitted it in March of 2008, over a year ago, to a periodical which states that a decision can be expected in four to six weeks! Despite additional queries to the editor, the article remains in queue, presumably unread. I present it here in the hopes that at least a couple of people may take the time to read it.

Gentle readers, this article contains 3 footnotes. It would please me greatly if you would click on the superscript numerals which link to the notes at the bottom of the article. At the end of each note is an upward-pointing arrow which will bring you back to the point in the article from whence you left. You can't imagine how long it took me to figure out how to do that in html code. 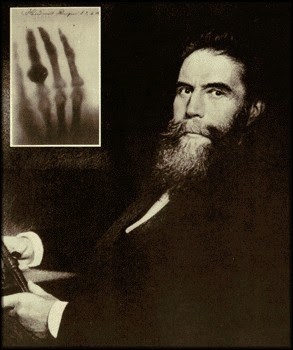 Wilhelm Conrad Roentgen with Radiograph of His Wife's Hand

In 1895, the German physicist Wilhelm Conrad Roentgen (or Röntgen, for you Teutonic purists1) discovered a type of radiation, which he called the X-ray, that could pass through solid objects. Shortly after his discovery, Roentgen used the mysterious ray to produce a picture (radiograph) of the bones of his wife's hand, which he could show around at scientific symposia, and possibly at cocktail parties. But might not someone outside Herr Professor Roentgen's circle of friends and acquaintances want to know what Frau Roentgen's phalanges looked like? Yes! And thus arose the need for someone who could look at the radiograph and dictate what we now know as a radiology report: “The bones are normal. There are no fractures. Mrs. Roentgen was unable to remove her ring due to consuming too much marzipan since her wedding.” And so forth. OK, it wasn't really as simple as all that, but eventually a group of physicians made it their business to produce and interpret radiographic images, or, as a patient once so delicately described it to me, to “look at people's guts all day.” In the early days, the specialty of diagnostic radiology depended solely on X-rays to produce medical images. Today, in addition to X-rays, images may be produced by sound waves (sonograms), radio waves in a strong magnetic field (magnetic resonance, or MR, scans), or minute amounts of radioactive material injected into the patient (nuclear medicine, known to some of its detractors by the anagrammic unclear medicine). In recent decades, medical imaging has been improved by rotating the X-ray tube around the patient, resulting in computerized axial tomography (CAT) scans. Even more recently, a new type of nuclear medicine scan, positron emission tomography, has become widely used, and nowadays is combined with the CAT scan to provide more precise diagnostic information. Thankfully, the more succinct “CT” replaces “CAT” in the name of the hybrid scan. Otherwise, we would be saddled with the PET/CAT scan instead of the PET/CT, and would have to suffer endless jokes about giving the family feline the once-over.

We enjoy the advantages of these new technologies today, but the early history of radiology was all about the X-ray, also called the Roentgen ray, in honor of the discoverer. To this day, one of the major professional associations for diagnostic radiology is The American Roentgen Ray Society, and their publication is The American Journal of Roentgenology, more commonly known as the AJR, or the Yellow Journal, not because of scandal-mongering editorial policies, but because of the color of the cover.

Like some early photographs, radiographs in the early twentieth century were recorded on glass plates coated with an emulsion. During World War I, if a medical officer wanted to locate a bullet in a doughboy's belly, he might have ordered a radiograph of the abdomen. The patient lay down under the X-ray tube with the emulsion-coated glass plate behind him. Today, even though radiographs are likely to be stored on a hard drive in digital format, the phrase "flat plate of the abdomen" refuses to die, and occasionally shows up in physicians' orders. Radiographs did not evolve directly from glass plates to digital images. A long intermediate step occurred when radiographs were produced on flexible films, like the ones seen hanging upside down in today's televised medical dramas. Before automated processors were invented, these films were dipped by hand into the developing solution and had to be hung up to dry. If the physician requesting the X-ray wanted to know the results immediately, the radiologist was asked to do a "wet read", or interpret the film before it had hung on the line long enough to dry. Even though it's been decades since films were hand processed, requests for wet reads still occur. More common terms today are STAT read or phone report.

Although not found in Dorland's Medical Dictionary, the term ditzel is universally recognized among radiologists as a very small nodule found in the lung. Such nodules are usually benign and related to a previous infection, but occasionally, a lung cancer can appear as a very small nodule if found early enough, presenting us with the daily dilemma of how to deal with these tiny lesions. The origins of this word are obscure. The only similar word I could find, ditz, emerged in the 1970s to describe a silly or inane person, and it seems unlikely that ditz morphed into ditzel. Even though ditzel does not appear in any dictionary, the word has been used in at least one article in the medical literature, specifically in the Yellow Journal.2

The suffix -oma (tumor, from the Greek -oma 'mass') is found frequently in medical parlance (lymphoma, sarcoma, hematoma, etc.). In radiology slang, the suffix is more loosely used to connote an abnormality. For instance, a lesion found on an examination performed for an unrelated reason may be referred to as an incidentaloma. Thus, a ditzel seen in the lung on a CT of the chest performed for suspected clots in the blood vessels could be called an incidentaloma. A ditzel that is hard to see might be called a vagoma. If it is so vague that only one radiologist sees it, it could be called an imaginoma by his snickering colleagues. If Dr. Hackenbush develops a reputation for seeing lots of imaginomas, these questionable abnormalities may then be called Hackenbushomas—a dubious honor at best for the good doctor. Disclaimer: I use the name Hackenbush for illustrative purposes only. I know of no radiologist, living or dead, named Hackenbush, and if there is or has been such a person, I am sure he or she is or was a fine diagnostician.3

While ditzel seems unique to radiology, some other unusual words, which can be found in dictionaries, are used in radiology reading rooms, if not in the medical literature. One of these is schmutz, defined as "dirt, filth, or rubbish," taken directly from Yiddish. In radiology jargon, the word implies something that doesn't belong, and is, in a sense, dirtying up the picture, as in “There is some schmutz around the pancreas. It must be inflamed,” or “There is a little schmutz in the right lung. Maybe the patient has pneumonia.”

I once attended a lecture about the coronary arteries, and the speaker talked about the grumus he identified in a vessel. This is a word I have heard occasionally bandied about in the reading room, used more or less interchangeably with schmutz, and pronounced grŭmŭs. The speaker, who used the same pronunciation, stated that grumus means a gelatinous blood clot. Being the skeptic, I resolved to research the word when I returned home from the conference. I was mildly surprised to find that no such noun appears in current editions of The Oxford English Dictionary or Dorland's Illustrated Medical Dictionary, though grume, pronounced grūm, derived from the Latin grumus (little heap or hillock), is listed in the OED as "1. A lump, obs. 2. A clot of blood; blood in a clotted or viscous condition. Also, any viscous fluid or mass of fluid." My search for the elusive grumus took me to Lippincott's Medical Dictionary, published in 1906. There I found grumus, again pronounced with a long first u, nestled somewhere between Gruber's bougies (to paraphrase the definition, these were little medicated sticks of gelatin put in the ear canal) and guano (“. . .the excrement of sea-fowl . . . used with benefit, internally and externally, as a remedy in different forms of lepra.” Whoa!). Lippincott's defined grumus as "a clot of milk or blood; a curd; thick or viscid fluid, as pus."

Enough of etymology. I must return to the roentgenology department in search of the next fascinoma.

1. Note to Teutonic purists: It's much easier for me to type “oe” than to figure out how to repeatedly insert an “o” with an umlaut, so we'll stick with the English spelling of Roentgen↑

3. Hugo Z. Hackenbush was the character played by Groucho Marx in the movie “A Day at the Races.” By the way, the movie includes a hilarious scene with the Marx Brothers performing a medical examination on Margaret Dumont's character. When one of the other characters calls for an X-ray, Harpo responds by producing a stack of newpapers and silently (of course) hawking “Extras.”↑
Posted by Unknown at 12:45 PM

This is a really good piece that combines info and humor, I hope they will publish it. Your Groucho Marx profile photo makes me think of my brother-in-law. His wedding was a very large and very serious affair.. Until he came out in his Groucho Marx mask much to the chagrin of his new wife and his mother. But it was was so funny....Michelle

I won the Halloween costume contest in that getup at the children's hospital where I was working when that photo was taken approximately a hundred years ago. Everybody needs a little comic relief.

Thank you for this article. My doctor used the term ditzel in my medical report yesterday and I thought he was being facetious. Now I know he wasn't. Thanks.

Thanks for the entertaining explanation of "ditzels". They were on my radiology report of my most recent ct scan. My oncologist didn't seem too concerned but ordered a bone marrow just in case.